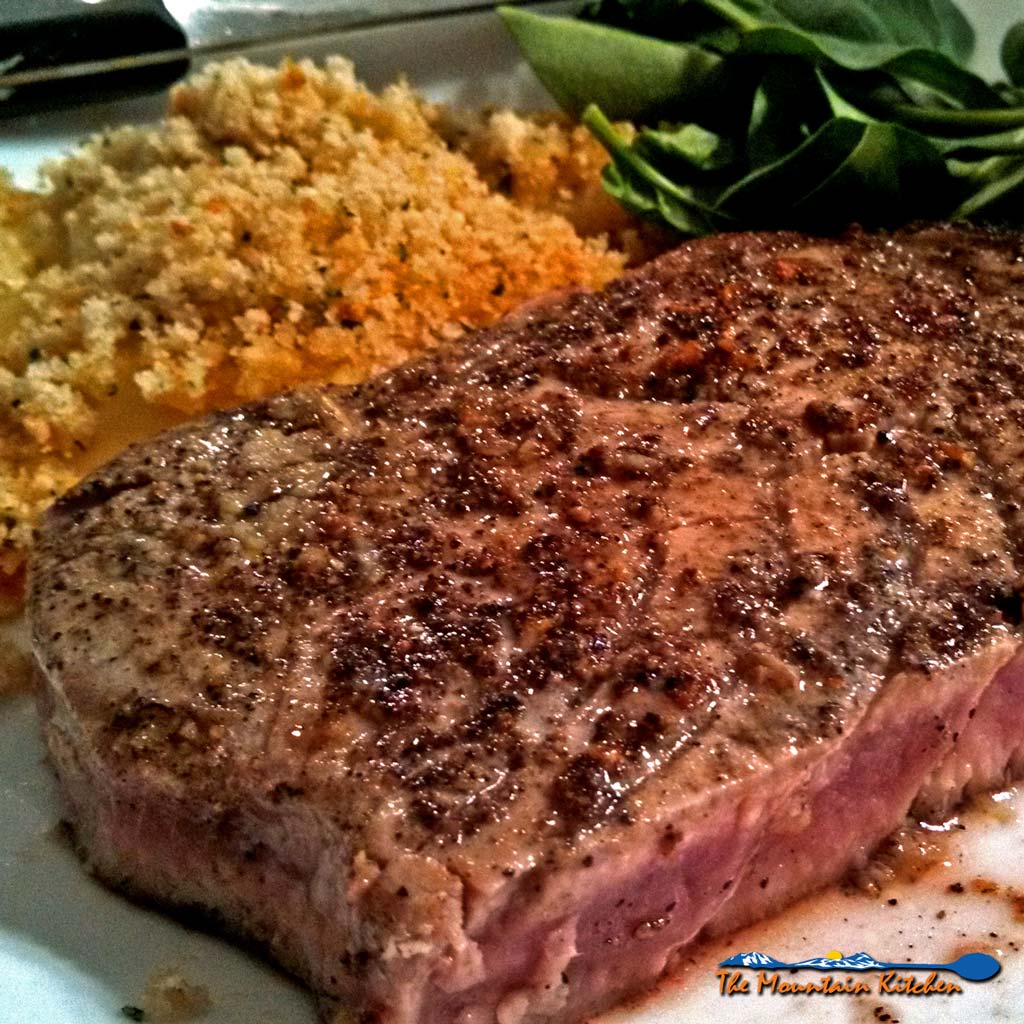 Pan seared lemon pepper tuna steaks were not my original plan, but I’m so glad it ended up that way.

A couple of weeks ago, David and I went to Wegmans to get the crab cakes for our Crab Cakes Eggs Benedict. While we were there, I decided I wanted to get some fresh tuna to make into tuna fish salad. I left David a minute to get the tuna and deal with the man behind the counter. When I came back over to David he had put the wrapped tuna in the basket with a befuddled look on his face. Turns out that Yellowfin Tuna was astronomically expensive. That tuna cost way too much to make into tuna salad, and if David didn’t make the man put the tuna back,  we were going have to prepare it to eat by itself.

I did some browsing online for tuna recipes. I also looked at some cookbooks I have at home and even asked a good friend how she and her husband have prepared theirs when they have it. Nothing was really screaming at me or David, until I opened up the spice drawer. The lemon-pepper seasoning I made a while back was still in the drawer and ready to use! That’s when it hit me. I would season the tuna steaks with lemon-pepper and mince up some garlic to infuse the olive oil and saute the steaks.

Here’s how I prepared these delicious lemon pepper tuna steaks:

Remove the tuna steaks from the refrigerator and packaging; rinse under cold running water.

Lay the steaks on a plate and blot them dry with a paper towel.

Sprinkle both sides of the tuna steaks generously with lemon-pepper and squeeze a little lemon juice on each steak.

Heat butter and olive oil in a cast iron skillet, over medium-high heat. Once the oil is hot and the butter begins to foam, add the minced garlic. Sauté long enough to permeate the oil, but do NOT let it brown.

Turn the steaks and cook the second side for an additional 4 minutes.

Remove from the pan and allow the steaks to rest a few minutes. Squeeze some extra lemon juice on top before serving.

I made homemade Potatoes Au Gratin and plated the steaks with some fresh spinach and spritzed the fish and spinach with fresh lemon juice.

This accidental splurge on tuna steaks was really good. I highly recommend this is what you do, if you ever accidentally buy some really expensive tuna steaks and make pan seared lemon pepper tuna steaks, you’ll love it!

Crab Cakes Eggs Benedict With Skillet Potatoes
Shrimp Stock { I Made It. Now, What Do I Do With It?