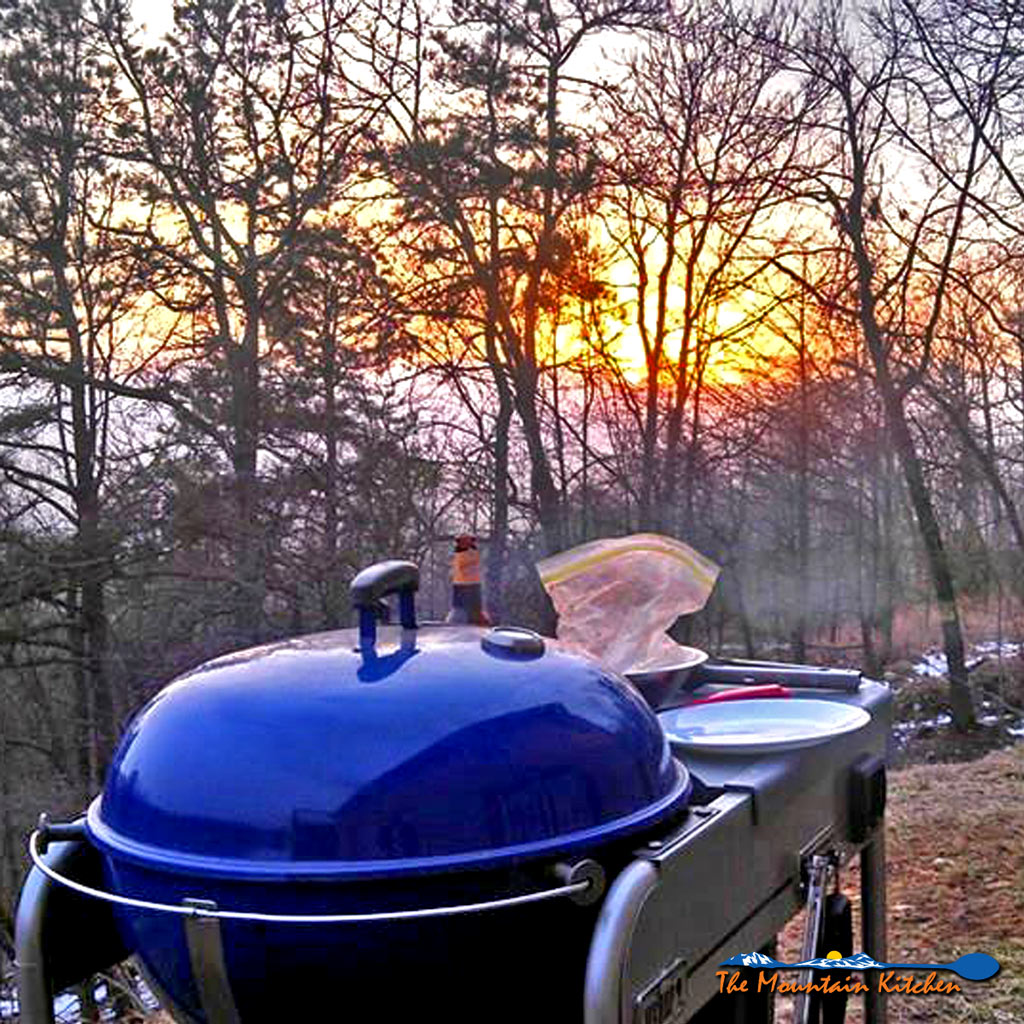 What do you call Grilling on a Wednesday??      Weber Wednesday!

It snowed again last Monday… AGAIN. It seems this winter is never-ending. A couple of days later the mountains were misty. The air was warmer and quickly melted the 8-10 inches of snow we had laying on the ground from that storm. It wasn’t an ideal day for grilling, but it made for some interesting viewing.

We almost decided against grilling, but after debating it, David and I decided to stick to our original plan. I had him fire up the grill to cook two meals we planned for the week, Shrimp Tacos and Teriyaki Chicken.

We have had shrimp tacos several times now, but we have never put charcoal under them to cook. I had been doing it on our indoor griddle. I very much wanted to know what these would taste like off of that beautiful Blue Ridge Blue Weber sitting outside in the cold.

David peeled, deveined the shrimp, while I worked on the marinade for them.  After the marinade was prepared for the shrimp I made the cabbage slaw for the tacos so that it could get happy as well. I used a Savoy cabbage this time instead of the red cabbage. It was yummy before it even had time to sit

After David was finished with the shrimp, he helped me prepare the Teriyaki Sauce for the chicken. We then put the shrimp and the chicken in the refrigerator to marinate, while I took my walk…  yes, I am exercising, wowzer!

Upon my return, David lit the grill and skewered the shrimp, while I prepared everything else needed for the Shrimp Tacos that we were going to eat that night.

The shrimp were quick, easy and done in about five minutes. The chicken continued to cook while we ate our shrimp tacos.

I almost didn’t make the Chipotle Sour Cream mixture to spread onto the tortillas, but at the last moment, I opened up the refrigerator and those chipotles we’ve had in the back called my name. I pulled out the jar, opened up the lid and stuck the jar up to my nose. With one smell of those smoky chipotles, I had to have some. I found an almost empty sour cream container, with just enough sour cream to mix up a batch of this wonderful concoction.

The shrimp barely took 5 minutes and were cooked to perfection!

We slathered the grilled tortillas with the Chipotle Sour Cream.

I am so glad I made this. It wouldn’t have been as good without it!

Then we piled on the marinated grilled shrimp, the cabbage slaw, some fresh tomatoes, and cilantro. They were the best shrimp tacos we have made ever and they will become a regular meal in our house. YUM!!

Once the chicken cooled, we put it into the refrigerator for the following night. All we had to do was put the breast in an oven-safe baking dish and bake at 350 degrees F until they were warmed through. We cut the chicken off the bone and made our sandwiches. (Sorry, no photo for these: GULP!)

Weber Wednesday was just what we needed! I love that David cooks year-round on his grill. I just wish spring would appear so that maybe we could dine on our deck…sigh.