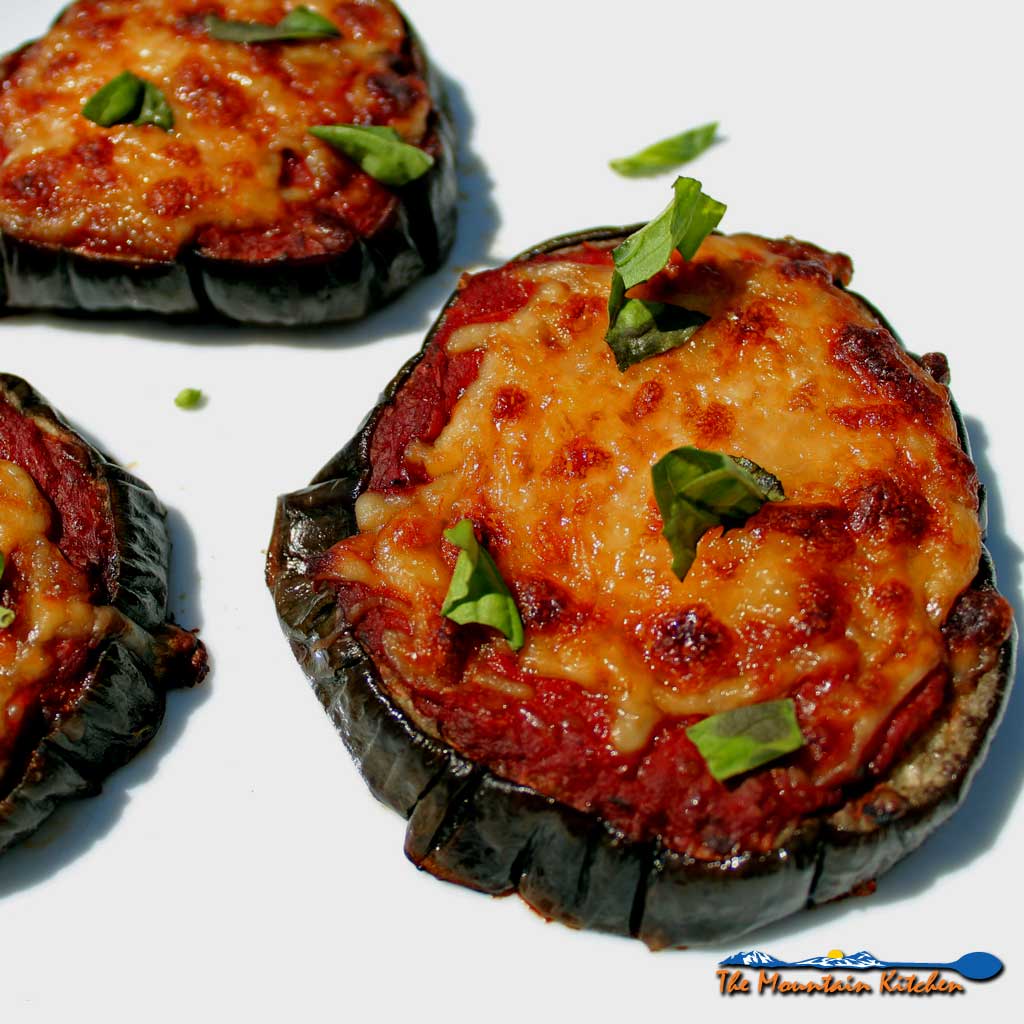 I first blogged about Julia’s eggplant pizzas for Meatless Monday back in August of 2013. I was a little intimidated by this recipe because I was worried that the “pizzas” weren’t going to be good. At that time, I didn’t have a lot of experience cooking eggplant and there was a part of me that wanted to wuss out and make Eggplant Parmesan instead. After battling it around in my mind a few minutes, I finally took a deep breath and proceeded to make the “pizzas” hoping I wasn’t wasting time on a meal that wasn’t going to taste good.

I was so wrong to think that way, these eggplant pizzas are delicious! I should have known Julia Child wouldn’t steer me wrong.

I recently revisited this recipe and decided to revamp the old blog post. Let me show you how I made Julia’s eggplant pizzas: 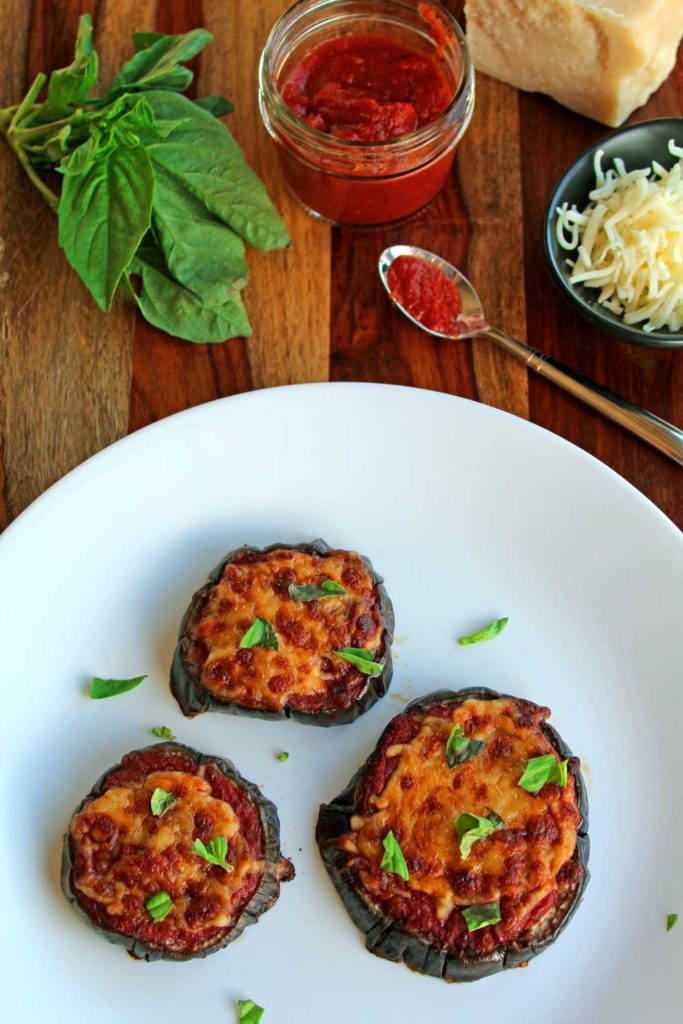 This is the recipe that taught me about salting eggplants. Putting salt on the eggplant trigger osmosis, which draws out excess moisture and the bitterness along with it. It also seems to make the texture of the eggplant less mushy and I have to say it’s one of the greatest tips I have learned in my years of cooking eggplants.

This simple process begins with a globe eggplant. First, you both ends from the eggplant; then cut it into ½-inch thick slices. Next, you place the eggplant pieces on a double layer of paper towels (or place in a strainer) and sprinkle both sides generously with salt. Let the eggplant sit with the salt on it for about 30 minutes to draw out the liquid. Salted eggplant can sit for hours without harming the taste or texture, so you could actually salt them overnight in the refrigerator to save time when you prepare them.

The photo below shows what this process looks like. You can learn more about salting eggplants HERE! 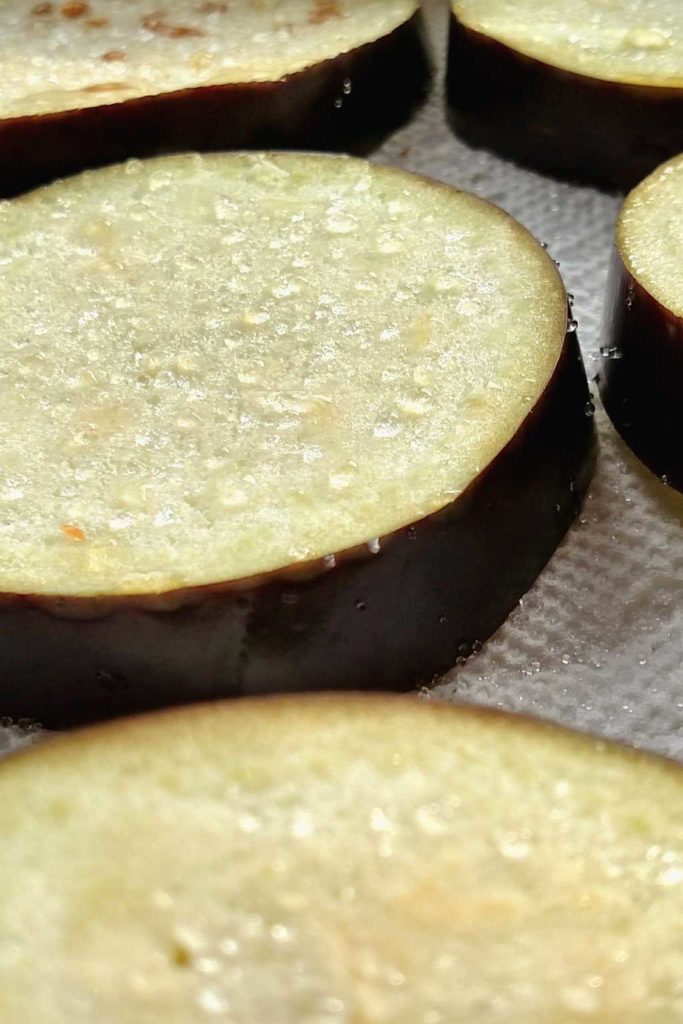 While the eggplant slices drained, I made the tomato sauce and allowed it to simmer on low heat, stirring occasionally.

After the eggplant slices sat for about 15 minutes, I turned on the oven and preheated it to 375 degrees F.

When the eggplant drained for the full 30 minutes, I rinsed the salt off well, under cool water and patted the eggplant dry with paper towels. ~ It’s very important to rinse the eggplant slices well, or they may be too salty if you don’t. I know this because it has happened another time when I made these pizzas.

I laid the rinsed and dried eggplant slices out on a baking sheet brushed them with olive oil, and sprinkled with the Italian seasoning, then placed them into the preheated oven to roast for about 15 to 20 minutes. ~ It’s important not to overcook the eggplant slices, they need to maintain their composure to hold up to the sauce and cheese, so don’t cook them to death.

When eggplant slices are done, I removed them from the oven and preheated the broiler on High.

I spread a few tablespoons of sauce on the top of each eggplant slice and topped the sauced eggplant slices with a sprinkle of the fresh basil and topped the basil with a generous amount of cheese; returned the “pizzas” back to the oven under the broiler until the cheese is melted and slightly browned, approximately 5 to 10 minutes. 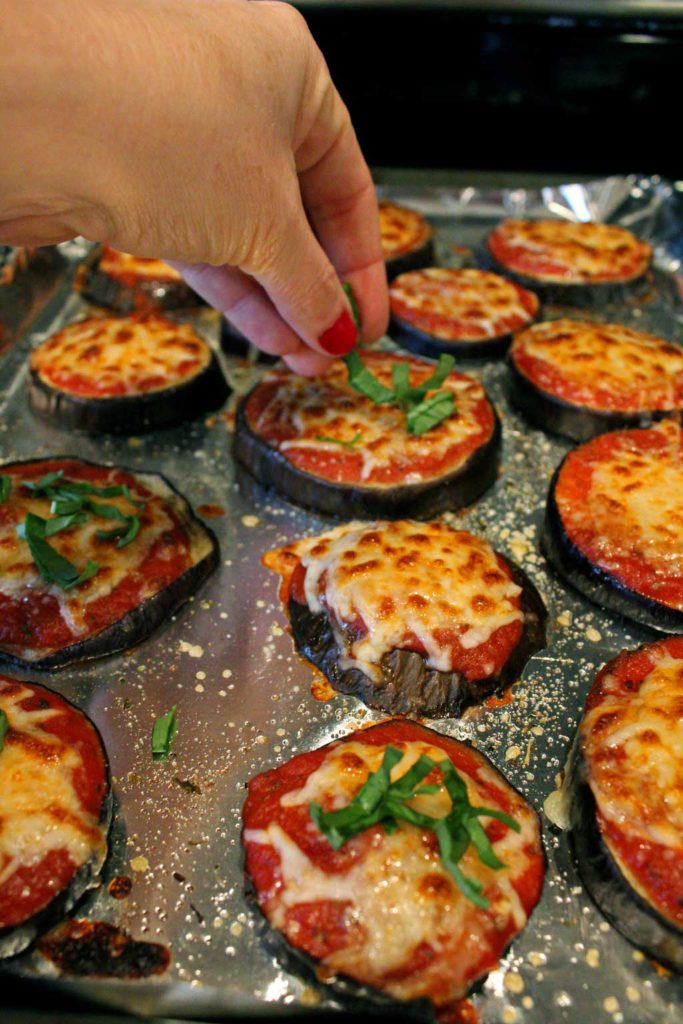 Wow, were these pizzas good! I do not know why I worried about these so much. I could have eaten all of the pizzas by myself.

At about 200 calories a serving, who cares! 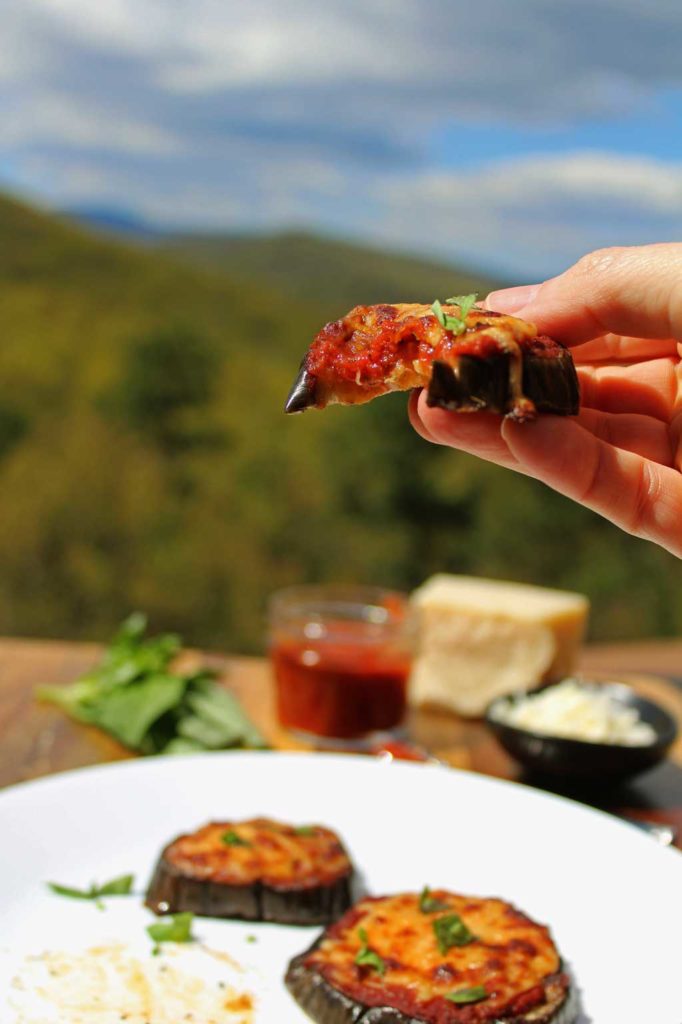 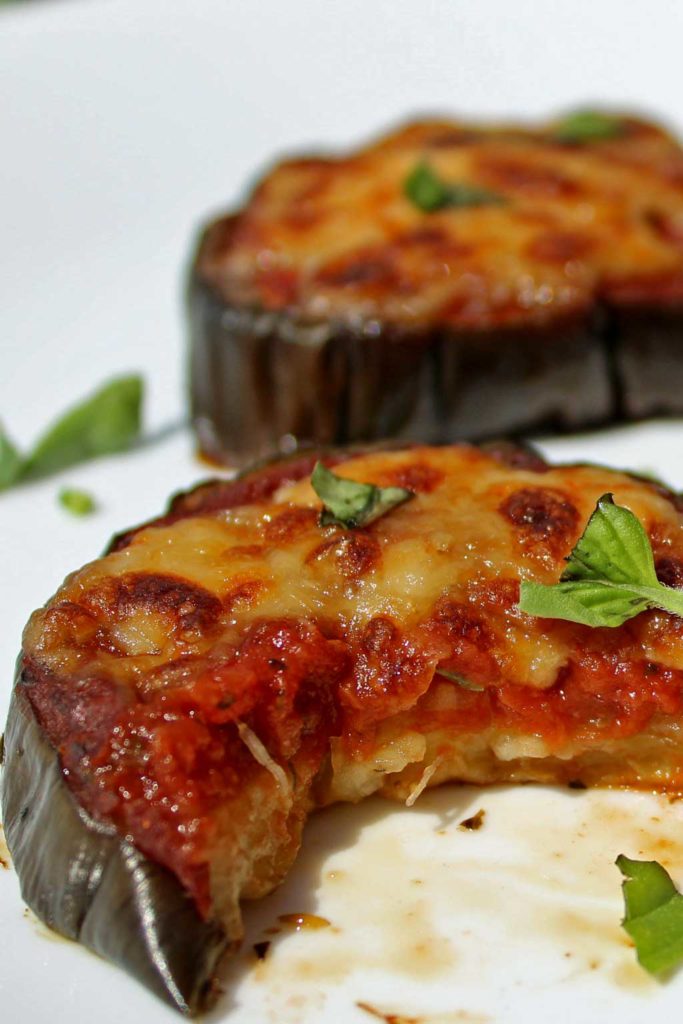 After scarfing up the last one, I had visions of doing this again, using Portobello mushroom caps, which I also have made since I originally posted this recipe.

I hope you’ll like this recipe as much as we did. Just think about all those carbs you won’t be eating with pizzas made like this!

The Mountain Kitchen is a participant in the Amazon Services LLC Associates Program, an affiliate advertising program designed to provide a means for sites to earn advertising fees by advertising and linking to Amazon.com.

There is no extra cost to you for clicking! It just helps us afford to do what we do here at TheMountainKitchen.com. Thanks for your support!