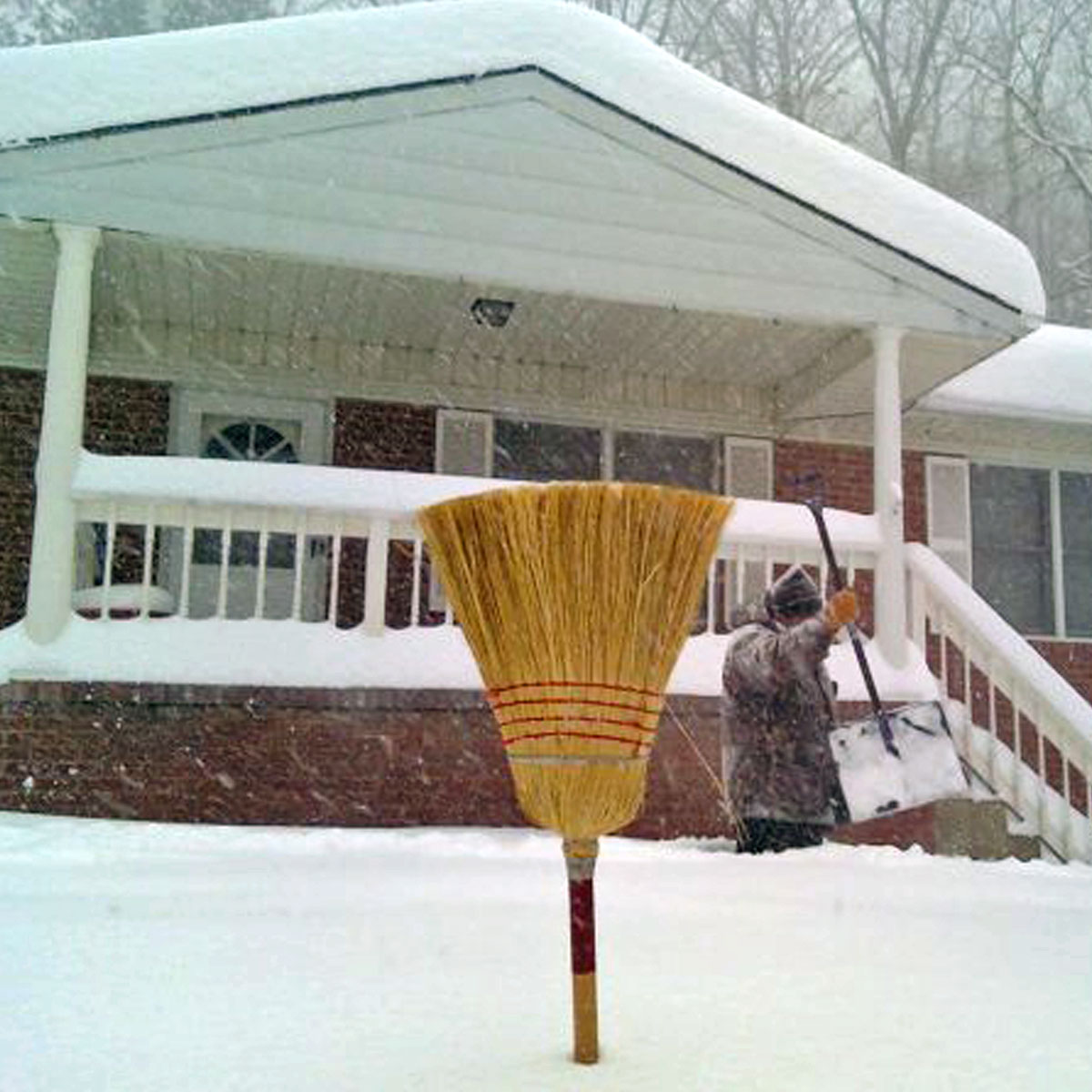 When I closed my eyes, I could hear the cringing sound of the crunching metal and bending steel as the truck slammed head-on into the tree. I could feel my whole body thrust forward against the seat belt and slam back into the seat. I could hear our grocery flying across the back seat of the truck onto the floor.

I opened my eyes, a huge mound of snow from the surrounding trees came crashing down on top of the windshield of the truck with a thump and then the sound of the drink holder in the center of the dashboard falling out onto the floor. Everything was quiet for a brief second before David and I could break out of the shock of the crash to check on each other.

Thank God! We were both okay. Besides David hitting his knee on the dashboard, and me having the wind knocked out of my chest, we were fine, but the truck was in bad shape. We crashed head-on into what was once a tree.

The tree was dead and had no top limbs. In fact, it looked more like a light pole than a tree. Regardless, it gave a whole new meaning to the words “Hard Wood”! It was probably a blessing, but the airbags did not come out. Somehow they must have malfunctioned.

My door would not open and it was pinned against another tree. We were able to get out on the driver’s side. We hugged each other for dear life and we both welled up with tears. We were overwhelmed by what just happened and trying to comprehend how lucky we were. 3 miles from home we were stranded in the cold snow. David called the police and we awaited help.

While we were waiting for help to arrive the strangest thing happened. A lady wearing an ugly (probably expensive) fur hat drove up in an SUV. She slowed down, stopped right beside where we were standing in the road.

She rolled down her window, shook her head and said: “I am so sorry. So sorry.”

And then she drove away!

All we could do was stare at her until she disappeared. Really?!?!… She didn’t offer us a ride or any help whatsoever. We still questioned that whole encounter. It was a horror movie kind of creepy!

Another SUV approached us, but this time the person driving stopped and offered help. Our groceries were all over the truck, but the good Samaritans who stopped to help us, even helped us collect our groceries from the truck and take us home. The couple was picking up their daughter from a sleepover on our mountain.

Even though the snow was piling up by the minute, they were willing backtrack to take us home and ensure we got there safely. We could not thank them enough. It was one thing to take us home, but they were risking their own safety to help us out. They were truly good people; a lot more help than the weird lady in the ugly fur hat…

The snowstorm was pretty bad. The cop showed up at the scene of the accident. David talked with him on the phone. He told David he thought the truck was punishment enough. He wouldn’t write him a ticket for failure to maintain control of a vehicle. We were a little baffled by that. Sliding into a tree uncontrollably didn’t mean David couldn’t drive.

Why was there even a chance that he would get a ticket?

There was no one else involved or even threatened. The tree didn’t even move or have a dent in it. He did say that the road was too dangerous for a wrecker to be called and that it would be best to leave the truck until morning since it was not on the road.

We were supposed to be on our way to FedEx Field in the morning. Sliding into that tree pretty much slapped the excitement out of us. We feared we wouldn’t be able to go at all.

The next morning, tired and sore from the accident, we got dressed and ready to go to the football game. Our plan was to get to FedEx Field to see whatever was left of the game when we got there. The game started at 1:00 p.m., but we had a little over an hour’s drive. It isn’t like we could have left when we had planned anyway. We needed the roads to clear up some. We only had my rental car, because my Jeep was still at the body shop.

It was almost noon when the wrecker truck driver finally called. We met him at the scene of the accident. Once the truck was pulled from around that old dead tree, it was pretty obvious that it was totaled. The truck hit so hard that the front axle broke in two! I was most definitely feeling the aftermath. Bruises from the seat belt were starting to make themselves visible, but hey, it could have been so much worse!

Once the truck was loaded and the paperwork was signed, we headed to catch the rest of the game. We arrived a couple of minutes before halftime. We could hear the announcers calling the last minutes of the first half, as we walked towards the stadium. We didn’t make it to our seats in time to see any of the first half, but we made it.

I don’t even drink beer, but a beer was definitely in order. We were glad to get to see some of the game since it was our first.

Call it fate, but we got a bonus quarter. The game went into overtime. It was a tight game, but the Skins lost. David was happy about that and I really wasn’t that sad. I was just glad we were able to go.

It was starting to get dark and it was cold! There was still snow in the bleachers and in the grassy areas. By the time we made it back to the car, we were pretty cold, even though we dressed warmly. We made it home for the end of the 4:00 p.m. games.

For the next two weeks, David and I were both driving rental vehicles. His truck was totaled and the $6000 worth of damage that was done to my Jeep was still being repaired. Sometimes it is hard enough to remember where you parked in a crowded parking lot. Well, try remembering where you parked when you don’t even know what you are driving! Thank goodness for key fob panic buttons. If it weren’t for that I don’t think I would have been able to get home a few times…

David was issued a check for the value of his truck and gladly purchased a new-to-him 2007 Dodge Hemi. It was charcoal gray, but it turned white for most of the winter. Let me explain…

They say careful what you wish for. Do you believe that statement? We do! You see, before moving up to Bull Run Mountain, I was excited and told David that maybe we would actually get to see some snow. I wished we would at least see more than we used to when we lived in Virginia Beach.

My wish was granted tenfold!! Starting the weekend of the accident, it snowed every week at least once a week until the first week of March 2010. That may not seem like a big deal, but there was a point that winter in which our front yard had over 30-inches of snow in it. The snowstorm that happened the weekend of our accident was a six-inch base layer that did not melt until March!

Even His Royal Highness started to get concerned that the grass was never to be seen again. In fact, if it wasn’t for our landlord, we would not have gotten off the mountain. For two weeks that winter, our road was frozen with two feet of snow from our driveway and beyond. Eventually, a bulldozer had to come to clear a path.

Luckily I had gotten my Jeep back before the major snowstorms came. David and I both had to use a 4-wheel drive to get up the driveway after work. I lost count how many times I slid down the driveway trying to go out. I definitely got my snow wish, but our landlord assured us that THIS WAS NOT NORMAL!! He was right, Virginia never had snows like this. I’ve never witnessed that much snow in my life and David either.

We managed to survive our first winter on a mountain with record-breaking snowfall amounts. Amazingly, we did not have any backup source for heat or power. The whole winter, we only lost power for about 6 hours, during one of the major storms. That was the stupidest thing we ever did. We were blessed that we didn’t freeze to death.

We enjoyed life on Bull Run Mountain and we were glad to feel somewhat settled, but we kept all our boxes from the move. This wasn’t permanent. We longed for something of our own.