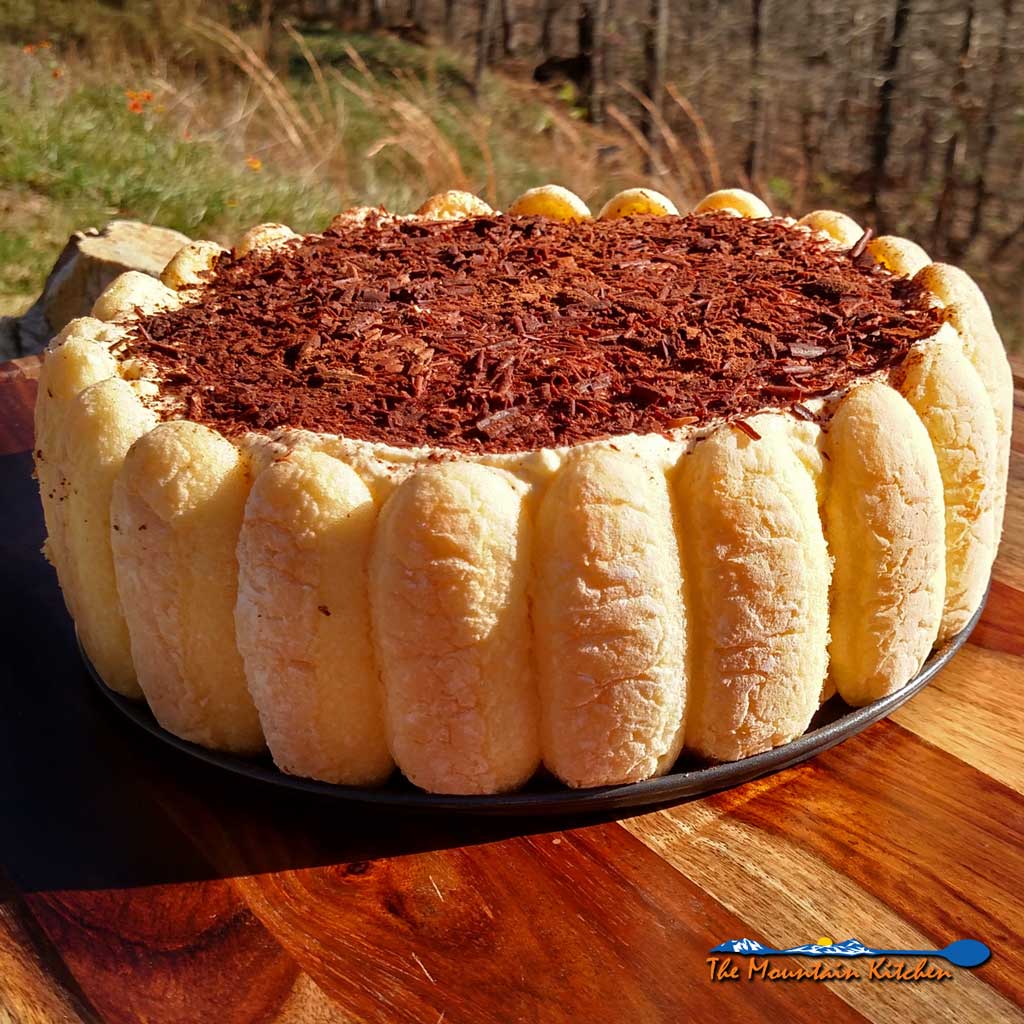 This year David requested homemade tiramisu for his birthday dessert.

In Italian, tiramisu means “pick me up”. Homemade tiramisu got its name because it has layers of sponge cake (ladyfingers) soaked in coffee or coffee-flavored liqueur. The layers of coffee-flavored ladyfingers are divided by a fluffy sweetened custard of Mascarpone cheese and egg yolks with whipped cream. Then topped with chocolate and cocoa powder.

David‘s birthday was Sunday, November 15th. His birthday always falls around the opening day of the Virginia Deer season.

For those of you who have no clue what is like to be married to a hunter, they usually start talking about deer about a week or so after the canoe goes on the rack and the rod and reel is put away for the last time, at the end of summer.

A hunter talks about hunting non-stop.

David talks with his uncle Wayne for hours about hunting. His uncle is more like a brother to him. Wayne taught David how to hunt when he was a kid. If David isn’t talking to Uncle Wayne, then he’s babbling about hunting to me. Whether it is the gear he needs for hunting. Who he is going hunting with. Where he will go hunting. If he needs a North Carolina hunting license in addition to a Virginia license. Or he talks about the deer scouted by friends. There is always something to be said deer hunting. At least 1 to 3 times a day.

Truth be known, I love to hear David talk about hunting and he gets excited like a little kid. He just lights up. He’s passionate about the sport. He even gets up at 3:30 a.m. in the freezing cold and drives 3 ½ hours just to go with our brother-in-law or his uncle.

That is exactly what he did on opening day. He got up at the pre-butt-crack-O’-Dawn and went hunting. Saturday was a lucky day for him. With his new gun, he killed a nice 17-inch wide 9-point buck.

Just look at the joy all over his face!

How To Make Homemade Tiramisu

Take the Mascarpone out of the fridge and let it come up to room temperature while making the custard mixture.

Reduce the heat to low, and cook for about 10 minutes. Stir constantly.  The more you stir the yolks and sugar the smoother it will get.

After 10 minutes, make sure the mixture is completely smooth and that the sugar has melted completely. Remove yolk mixture from the heat.

Pour the yolk mixture into a mixing bowl* and whip until thick and lighter in color.

Add the mascarpone cheese to the whipped yolks and beat until combined.

I only have one bowl for my stand mixer, so I had to pour the custard mixture into a different large bowl and clean up the mixer bowl.

It is important to whip the whipping cream in a very cold bowl with a cold whisk. If you don’t have an extra bowl like me, clean up the mixing bowl from the custard mixture. When the bowl is clean add some cold ice water to the mixing bowl. Give it a swirl or two with the whisk attachment inside. When the bowl and whisk are well chilled, quickly dry it out and pour in the whipping cream. Whip until stiff peaks form.

Gently fold the whipped cream into the custard mixture and set aside.

It’s important to fold to combine the whipped cream into the custard without knocking the air out of the mixture. It is best to use a spatula or a large spoon. Using a gentle touch, run the spatula or spoon around the side, then along the bottom, of the bowl, basically pulling the bottom of the custard up on top of itself. Rotate the bowl 90 degrees and repeat the same motion a few times, until just combined.

You do not need a springform pan to make this dessert. You can simply make layers in a bowl or pan. This is the first time I made Tiramisu in a springform pan and it turned out beautifully.

To assemble the tiramisu, split the ladyfingers in half (if needed), and line the bottom and sides of a springform pan or large glass bowl.

If using a springform pan, do NOT put any of the coffee liqueur on the outside ladyfingers.

I cannot count the number of times I have eaten tiramisu with soggy ladyfingers that have a mushy texture. Yuck!

Once the bottom layer of ladyfingers have been brushed with coffee liqueur, spoon ⅓ of the cream filling over the ladyfingers and smooth it out into as evenly as possible, using the back of a spoon.

For the next layer of ladyfingers, I like to dunk them into the coffee liqueur. They absorb more of the liqueur but not as much as they would if soaked. Simply pour some of the liqueur into a small bowl and dunk each ladyfinger into it quickly turning to coat both sides.

Top with the remaining custard mixture and smooth out.

Remove the springform pan before slicing and serve this homemade tiramisu garnished with extra chocolate, if desired.

*Sometimes the proteins in the eggs solidify with the sugar. Use a sieve to strain those out before whipping the egg yolk mixture.

To make the chocolate curls, use a vegetable peeler and run it down the edge of the chocolate bar. The chocolate needs to be fresh. My chocolate was still within the date marked on the package, but it was a little too dry to make curls.

David devoured his first chunk of Homemade Tiramisu, and then ate my slice too! 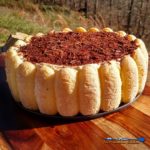 *Sometimes the proteins in the eggs solidify with the sugar. Use a sieve to strain those out before whipping the egg yolk mixture. To make the chocolate curls, use a vegetable peeler and run it down the edge of the chocolate bar. The chocolate needs to be fresh. My chocolate was still within the date marked on the package, but it was a little too dry to make curls.  Recipe adapted from AllRecipes.com