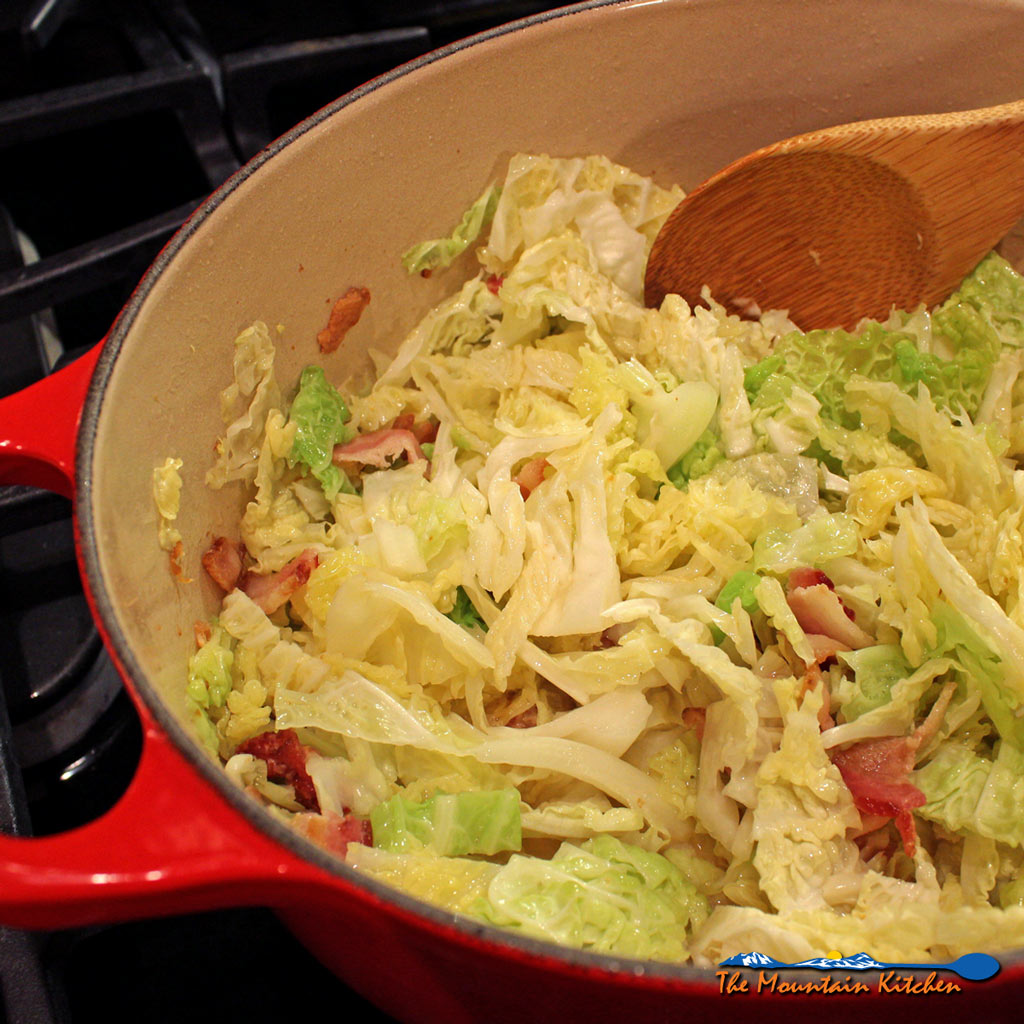 It’s almost St. Patrick’s Day and as I sit here and type, there is about 4 to 5 inches of snow covering the mountain. I finally got my snow day.

I guess it is better late than never, huh? 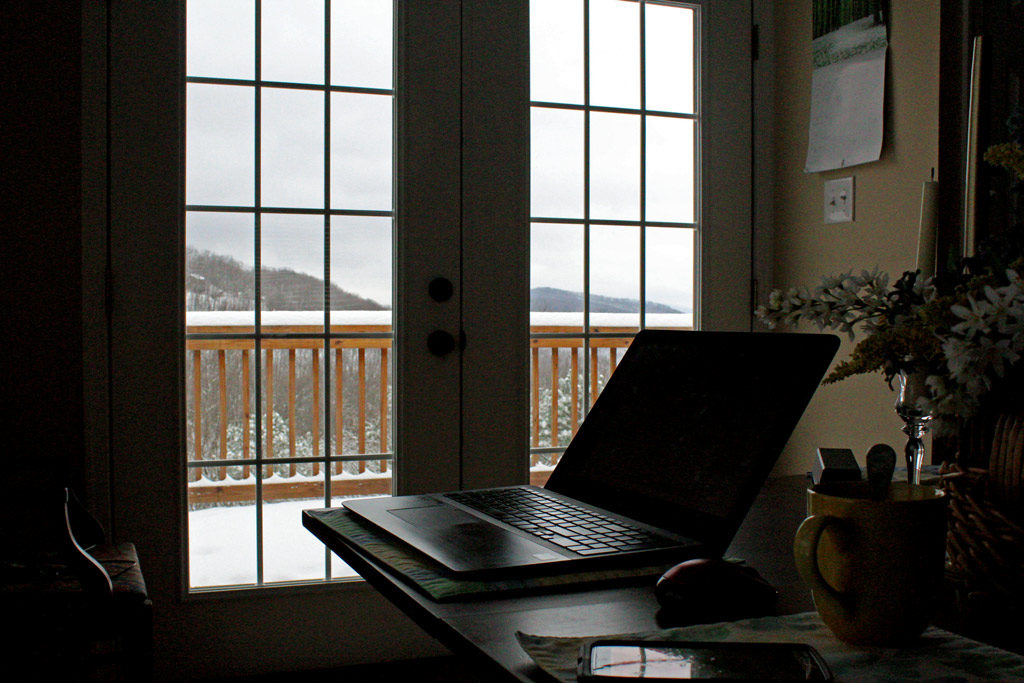 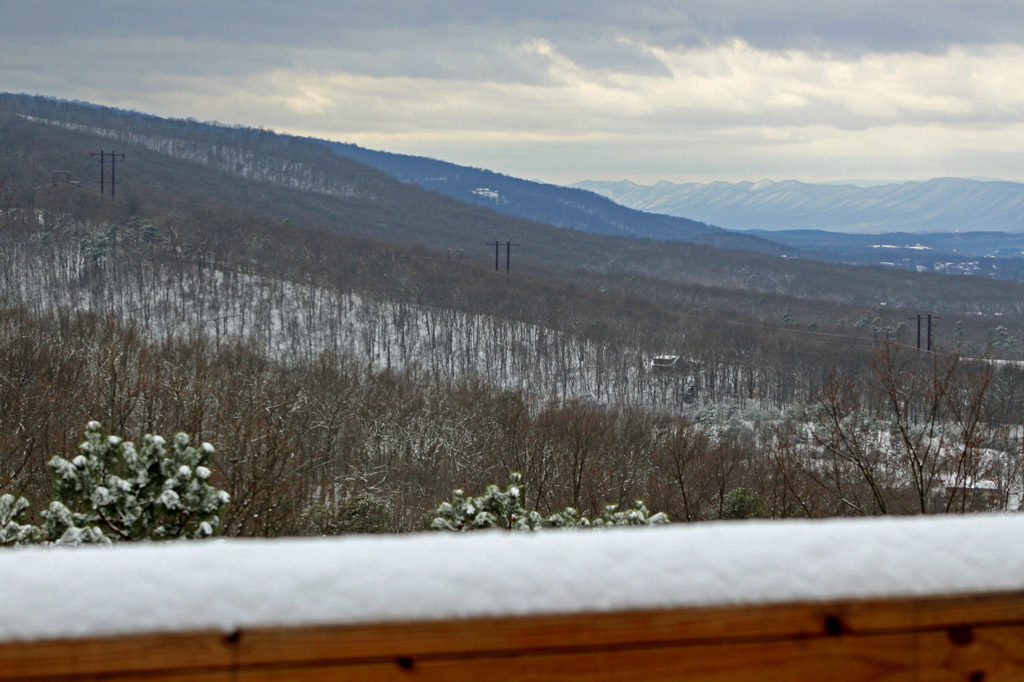 Speaking of St. Patrick’s Day, it’s going to be here in a few days. I am not a huge fan of Irish food and perhaps it is because I haven’t really explored it enough. My grandmother’s maiden name was O’Berry, so you’d think some of that Irish blood would provoke me to cook more Irish food, but so far that hasn’t happened yet. It is only a coincidence that I am sharing this recipe for bacon-fried cabbage. While my other blogging friends are posting yummy looking Irish recipes, this is an unintentional St. Patrick’s Day post about 3-ingredient bacon-fried cabbage. 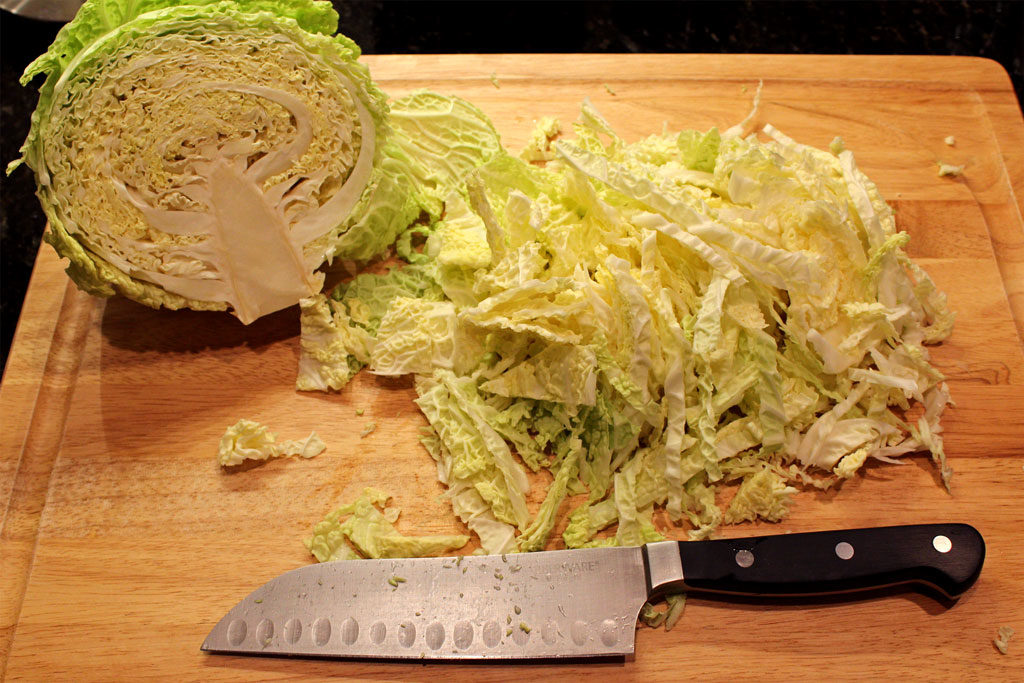 David and I used to boil cabbage with a huge ham hock for hours. It’s the way we cook cabbage in the south; you throw vegetables into a pot, throw in fatty pig meat and boil it to death. It would stink up the house and hardly have any nutritional value after it was all said and done. A little time would pass before we would boil another head of cabbage to death. We began to realize that every time we would sit down to eat boiled cabbage, it would start to bloat us like a blowfish after just a few bites. Not sure what kind of chemistry was going on in our bodies, but it wasn’t a pleasant feeling. It was almost like those stupid Beano commercials… (gasp!) 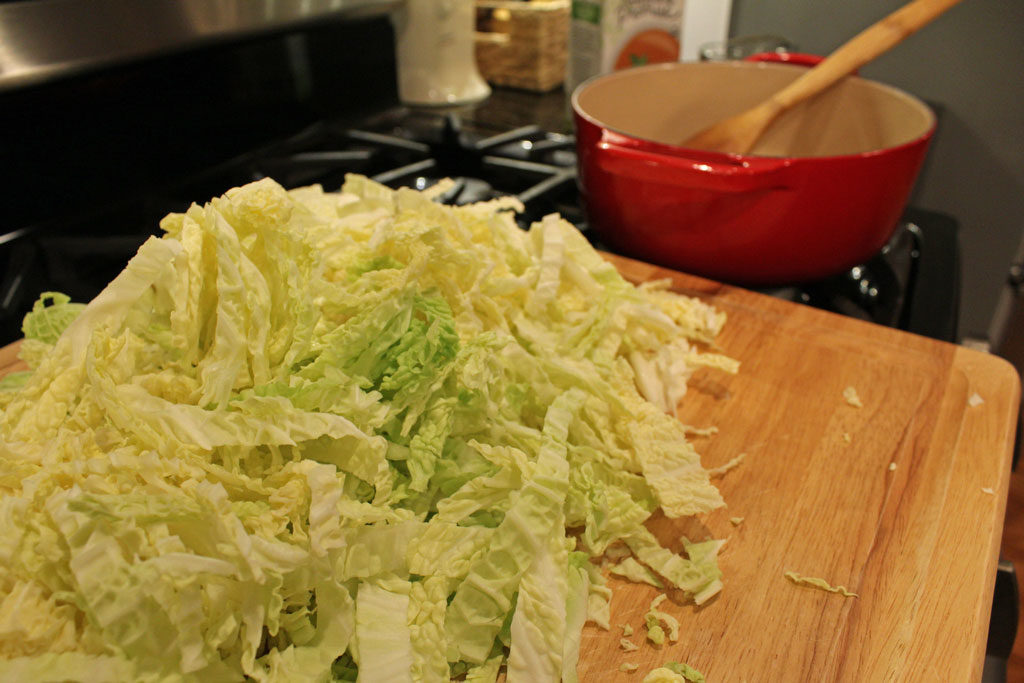 After boiling cabbages for years, one day I made a recipe by Michael Symon, in which pork roasted over top of shredded cabbage. This recipe inspired me to make Dijon pork chops over shredded cabbage with beets. David and I both noticed that the cabbage was more enjoyable. Cooked this way, the cabbage didn’t have the same effect as it had when it was boiled. So now, we either fry, roast or grill cabbage rather than boil it. I have to say the house sure has smelled a lot better since we stopped boiling cabbages to death… shew!

Besides salt and pepper to season it, this simple recipe for fried cabbage only has 3-ingredients; one of them being BACON! The cabbage is seasoned with bite-sized bits of bacon making it an easy to fix side dish in just minutes. 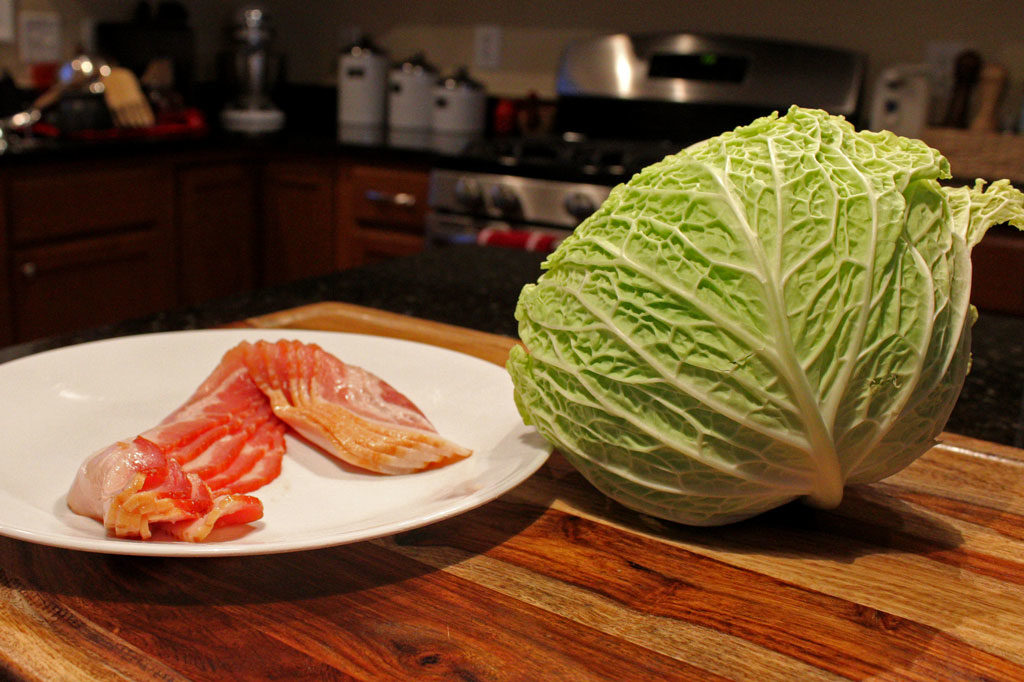 How To Make 3-Ingredient Bacon-Fried Cabbage

Using kitchen shears, dice the bacon into a large pot or deep skillet. Cook bacon over medium-high heat until crisp, about 5 minutes. 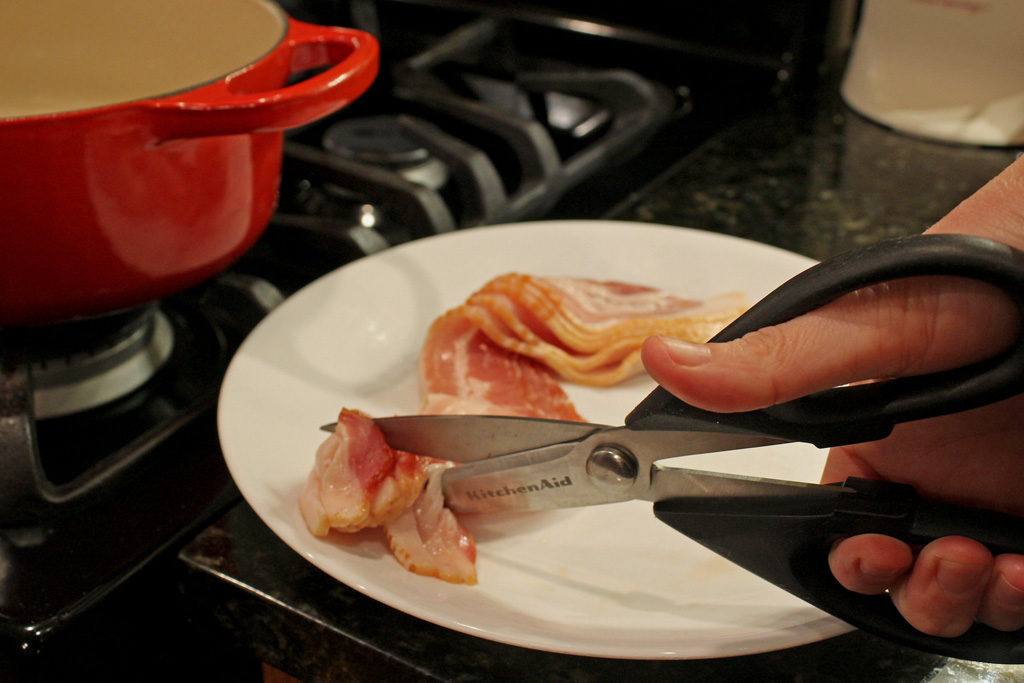 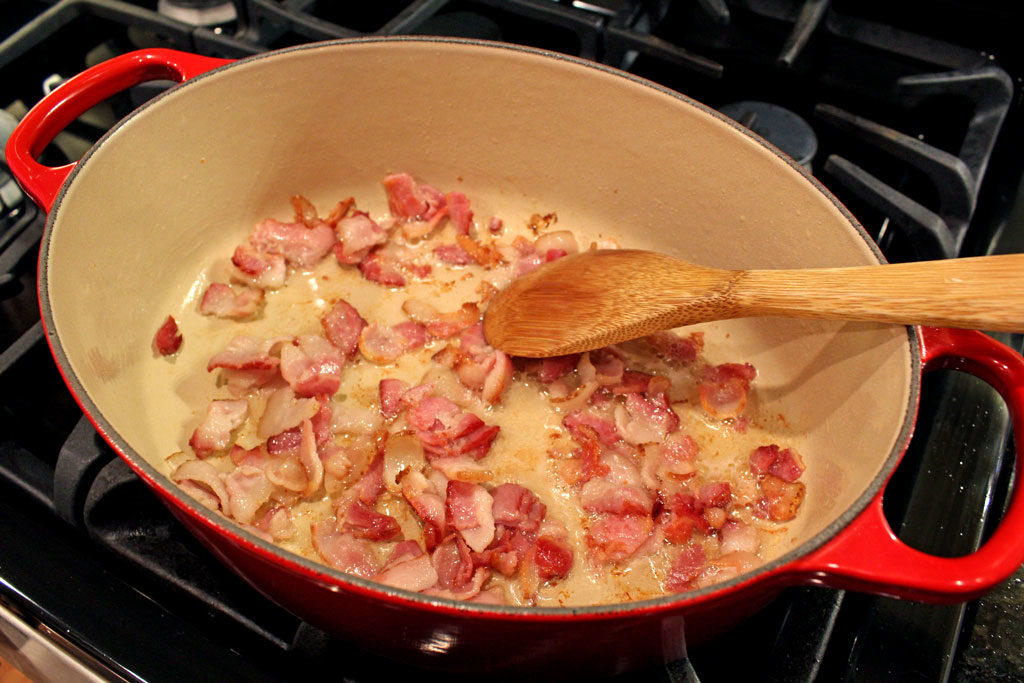 Add in the cabbage, toss well with the bacon and rendered bacon fat. 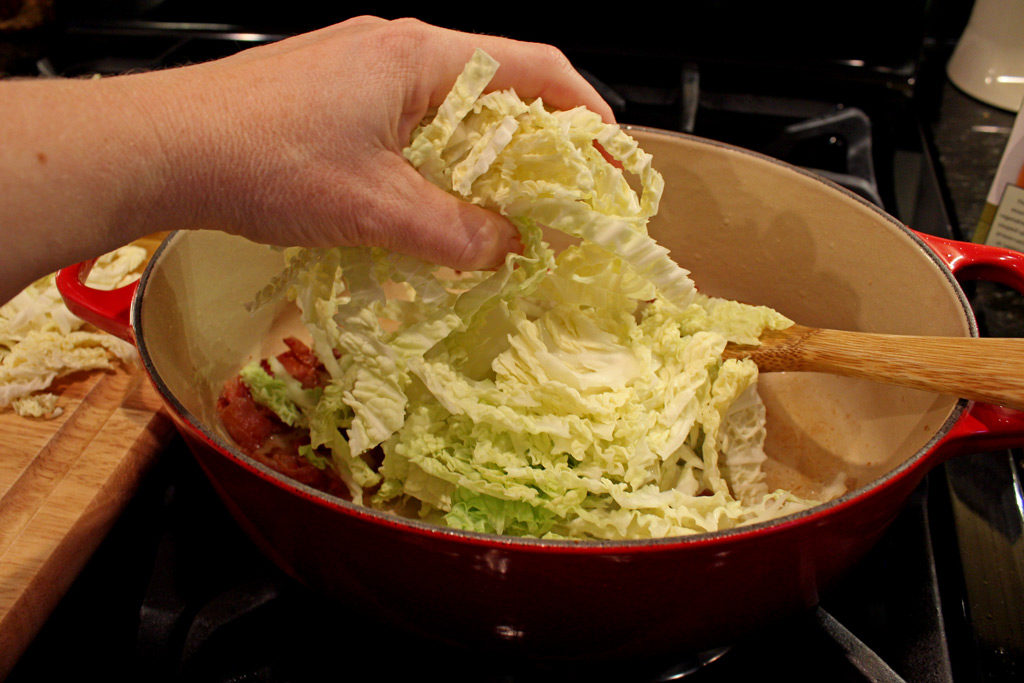 Pour in the vegetable stock. Continue to cook, until cabbage wilts, about 15 minutes. 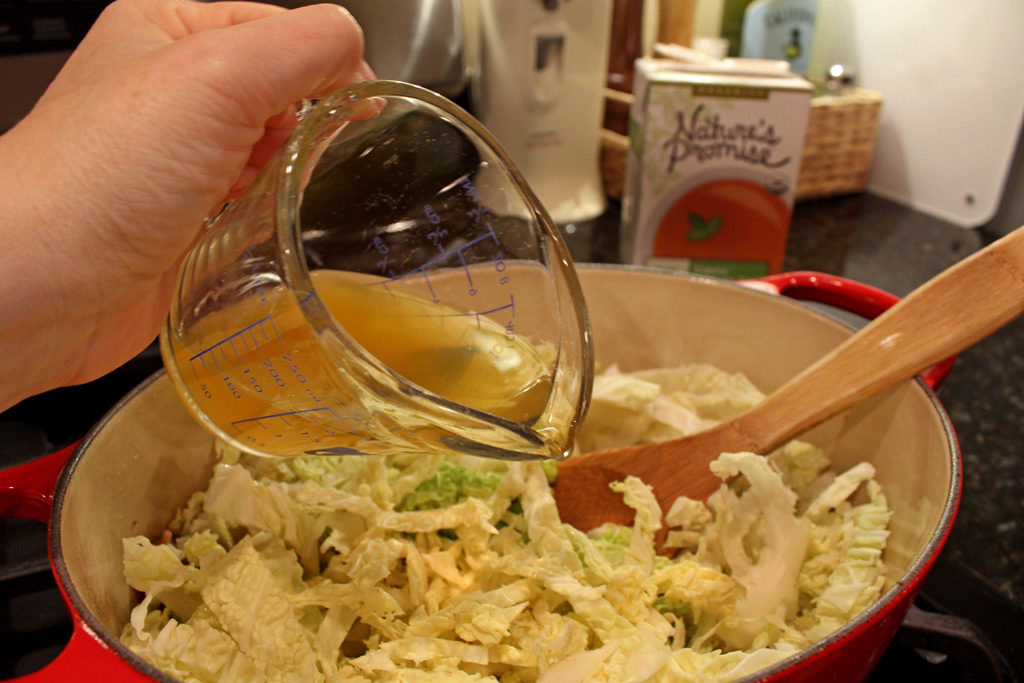 Note: For this recipe, I used savoy cabbage because it is more tender than regular cabbage and wilts a lot faster. 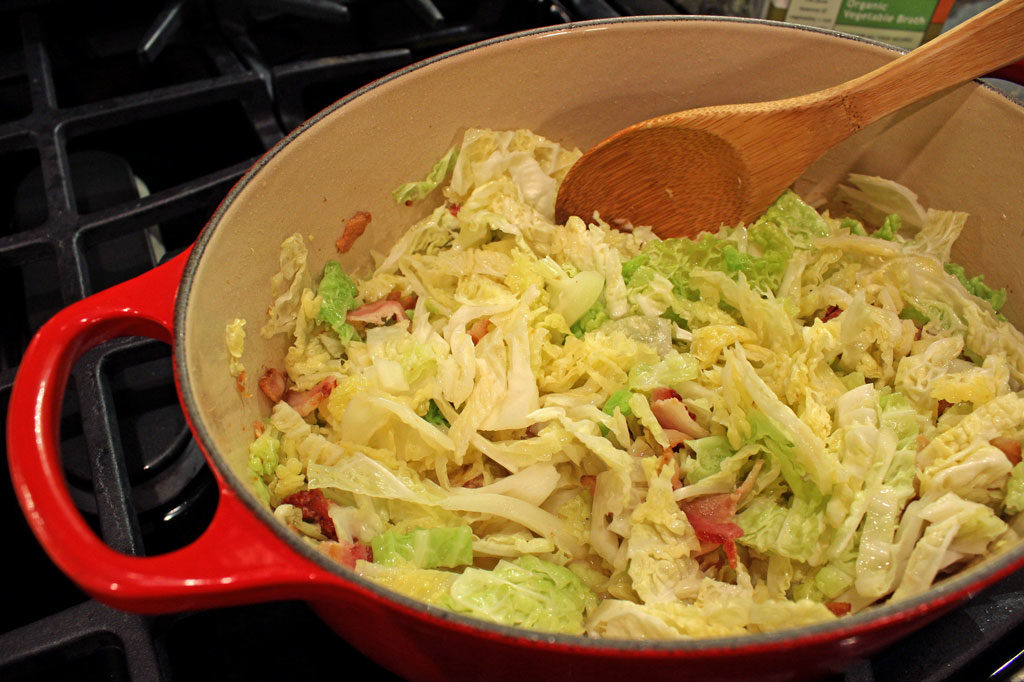 If you are not a cabbage fan, I promise that this bacon-fried cabbage will help change your mind.

Try some for St. Patrick’s Day! 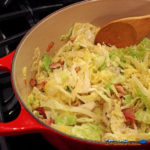 For this recipe, I used savoy cabbage because it is more tender than regular cabbage and wilts a lot faster.