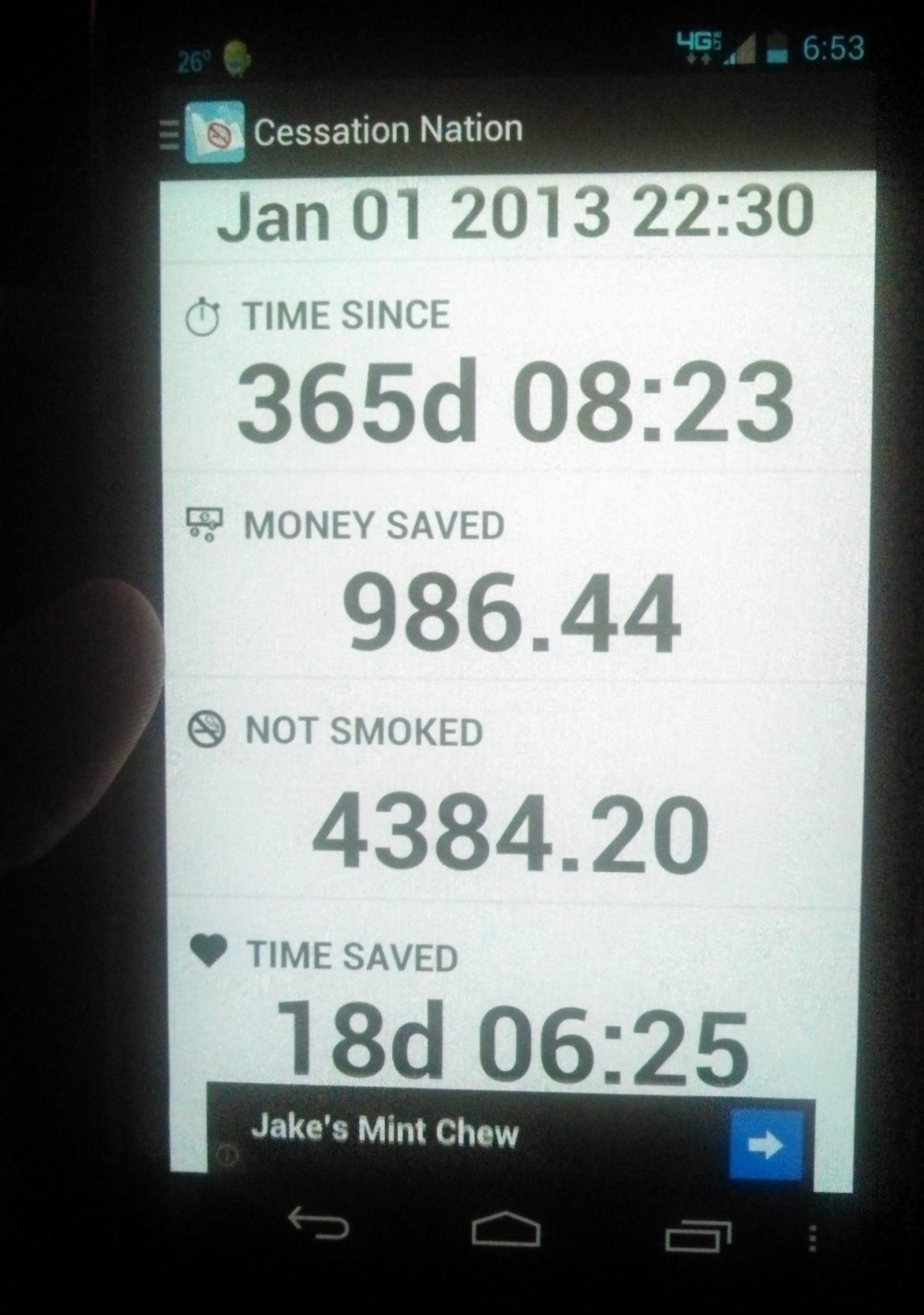 I have had 365 days smoke-free and somehow I’m still counting.

On January 1, 2013, at 10:30 p.m. I ran out of cigarettes. For the first time in 22 years, I didn’t go get another pack. Instead, I went to bed and decided I would figure out what to do the next morning when I woke up and didn’t have a cigarette to smoke.

A couple of weeks prior, David came home with an electronic cigarette. He didn’t push me but merely suggested I give it a try. A year before that, I went to a NASCAR race at Richmond, VA.

They were no longer letting fans smoke in the grandstands. In order to smoke, you had to get up and walk down underneath to smoke. On this same day, a company called CigRx was promoting a dietary lozenge to help with craving cigarettes while in the stands. Between myself and my friends I was with, I collected about 6 to 10 packs and took them home.

When I woke up the next morning, I had to force myself not to think about cigarettes. I used the electronic cigarette and I got all those packs of lozenges out of the closet. I tried to go on with my day, and I guess being at work sort of helped me resist the urge, but that’s the day that my own personal hell began.

Only when my cravings were at they’re absolute worst is when I use the electronic cigarette, but mostly I used the lozenges for all my cravings. Surprisingly, the lozenges did satisfy my cravings a lot. I still puffed that electronic cigarette for about and week before it played out on me. When it stopped working, I had no warning that it was empty. Like any nicotine addict, I immediately rushed to the store to get another. Once I had my crutch I felt better, but I still wanted a cigarette. When I got home with the new electronic cigarette, I realized that getting it was just prolonging my agony and my physical addiction to nicotine. I decided that after the new one was gone, I was done. I would just use the lozenges from then on. They didn’t have any nicotine in them.

Another thing that really helped me was an app I downloaded to my phone called: Cessation Nation. This app was probably my biggest help. The app kept track of how long it has been since your last cigarette, the money I was saving and the amount of time I saved from not smoking cigarettes. The app also told me the health benefits. However the health benefits weren’t all that important at the time, but what was important to me was seeing the minutes and hours accumulate.

Sometimes I stared at this app screen for minutes at a time. I think it was one of the things that kept me from losing my mind. I began to see the money savings start to accumulate and that really started to drive my motivation.

Becoming smoke-free is so hard. I wouldn’t wish nicotine withdrawals on my worst enemy. I cannot begin to describe the agony that my body was going through. The worst part was feeling like I had the flu. I had stomach irritability, body aches, and chills. I even missed time from work because of the withdrawal I was going through was so bad.

For about two weeks I could not get warm to save my life. It made me wonder if I was ever going to make it through the misery. They say that nicotine withdrawals are worse than someone detoxing from heroin. For most people quitting smoking isn’t that bad, but for me it was horrible. I completely understand what people mean when they say nicotine addiction is worse than heroin.

Eventually, minutes turned into hours and hours turned into days and days became weeks and weeks became months. I beat it. I was smoke-free and I detoxed my body from nicotine. The addict in me still wants a cigarette so bad I can taste it, but now it is 100% mental. Yes, it is nice having my full sense of smell and taste back. No, I don’t miss the smell of cigarette smoke after smoking a cigarette, nor do I miss standing outside in the freezing cold during the winter months, puffing on cigarettes.

I still battle the urge every single day. I guess the hardest part about being smoke-free for me is the disappointment. There are certain moments when I think out of sheer habit, “I’ll smoke a cigarette!” Then I realize I can’t, I don’t do that anymore. It is almost like mourning for someone. You wish they were there and they’re not. It makes me very sad and depresses me. It wouldn’t be so bad I guess, but I heard that I would feel so much better when you stopped smoking. What a crock. Not a moment since I quit smoking have I said: “Wow, I feel better!” The strange part is, I have been on blood pressure medication ever since I quit smoking. (I have given up trying to figure that one out.)

So, what keeps me smoke-free? What keeps me from going back to the store and buying a pack of cigarettes? The only thing I can figure is the fact that I don’t want to go through the agony of withdrawal again and having to start over. I promised myself that if I ever got through the torture, I would never have to go through it again. I always think back to what my brother told me many, many, years ago “Don’t ever start”. Why didn’t I listen to my big brother?

If I had it to do over, I probably wouldn’t have tricked myself into quitting. I just feel like I’ve come too far and past a point of no return. I will never tell someone they should quit smoking. Smoking is a person’s choice and only that person can choose not to go back to the store to buy more cigarettes.

If you are trying to quit, I hope I didn’t scare you too bad. I only tell it like it is, but just maybe some of the techniques I used will help you too because it ain’t easy. If you are a smoker, I have one question for you to think about: why do you let something like that control your life?

If you are reading this because you are struggling to stay smoke-free, it does get easier. It just takes time.

Farewell 2013
A Year of Meatless Mondays Comes With Exciting News!!