Live Trapping Groundhogs On The Mountain 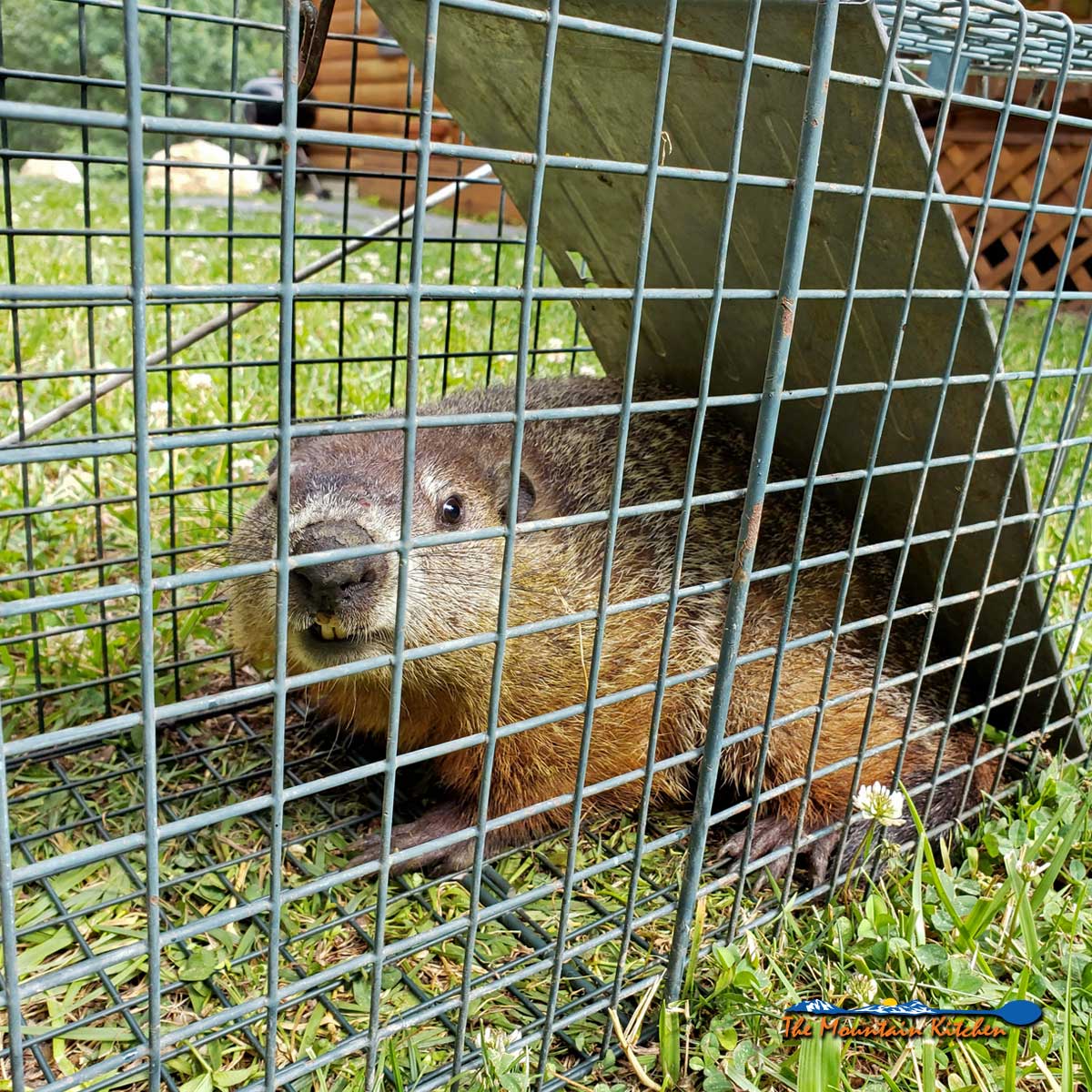 Sorry, I’m not sharing a recipe today, only a story about David and I live trapping groundhogs on the mountain. Visit our Recipe Index if you’re looking for something good to eat.

For those who like to read about our mountain critters, this story is a doozy!

After the past several weeks we can honestly say live trapping groundhogs is not easy, but it can be done!

I’ll start from the beginning…

Our home is a cozy safe-haven for David and I. Apparently, the critters of the mountain feel the same way that we do, and they also want to seek refuge there with us.

All of this craziness started in 2012 when our house was built. That summer David and I had an interesting encounter with a flock of racing pigeons. They decided to take a break from their race on top of our roof!

“There’s Never A Dull Moment On The Mountain”

A year after that was when those crazy three goats showed up in our yard. Not long after that, one of the goats, Biscuit, ended up using our front porch as a place to hide from that hungry bear.

Read the full story about the goats and bear and me HERE.

“The Goat, The Bear & The Frazzled Mountain Woman”

Then, along came Beni Bunny. Beni disappeared each winter only to return for two summers. Beni was so tame that I could actually feed her from my hand. However, I don’t think Beni is with us any longer. If you Google the life expectancy of a rabbit living in the wild, she probably was at her prime. (RI.P. Beni, we miss you!)

I’ve been so irritated with the hole that kept getting dug out from under our front porch steps. All last summer I thought it was Beni Bunny. However, this spring after filling the hole in it came back again. For some time now we have seen a groundhog running up and down our hill. We suspected that a groundhog may have been digging the hole. However, when Beni did not show up this spring it was obvious we had a groundhog issue.

I thought if I filled the hole with David’s hair (trimmings after a good grooming) and larger rocks that it would deter the groundhog from digging the hole back out.

The hole irritated the hell out of me, but when I noticed that the damn critter had chewed on the lattice on the porch making other holes.

That was the final straw! THAT GROUNDHOG HAD TO GO!

David would have hunted the groundhog down and shot him if given a chance. However, shooting guns is against the HOA bylaws of our neighborhood. Honestly, I’m glad because although our neighbors are spread out from each other, we are all still close enough to each other to pick up stray bullets. We really didn’t have a choice but to try to capture the groundhog in a live trap.

I was all set to go out and buy a live trap when David put out an APB on our HOA Facebook Group page. It just so happened that one of our neighbors had a live animal trap he was willing to loan us.

The neighbor told David he had success using cantaloupe. So we picked up some pre-cut melon from the store just for that pesky groundhog. We went home and David baited and set the trap over on the side of the yard where we would usually see the groundhog in the evenings.

The trap sat there baited and ready for a day or so without any luck. The bait withered in the hot sun and what the sun didn’t bake, bugs got the rest of it. We soon ran out of cantaloupe, and still no groundhog.

Meanwhile, the hole was still under the and under the lattice of our front porch steps. What made me hotter than 40 hells was that every other day we could see that pesky groundhog running into the hole under the porch when we would pull into the driveway. After a week, it was time to up our game plan.

There was now more than one hole leading under the front porch. There was the original hole under the front steps and yet another one under the lattice of the front porch. What made me hotter than 40 hells was that every other day we could see that pesky groundhog running into the hole under the porch when we would pull into the driveway. After a week with no success in live trapping that pesky groundhog, it was time to up our game plan. I must say, I’m sorry we missed the evening the bear came and turned the cage over. 😳

Maybe the dag gum thing was full from eating on my flowers and plants around the porch. Or maybe the groundhog didn’t like melons. This may very well have been because of the groundhog’s Italian roots. I say this because of my poor little basil plant. I’ve NEVER had anything mess with basil before, but the groundhog chewed it down to a nub!

After a few days of the trap not working in that particular part of the yard, I decided to move it closer to the porch. Since the groundhog didn’t seem interested in the cantaloupe, we decided to try some watermelon and some mango. David set the trap in the front yard closer to the house, baited and set the trap. We went to work, but still, there was nothing in the cage upon our return home that evening.

That night we made the mistake of leaving the trap set overnight and the only thing we caught was a poor raccoon that ate all the watermelon.

David discovered the raccoon when he went outside to start the car for work. He was scared to death!! All he could do was dart back and forth bumping into the cage and then lay down with his head on top of his little raccoon paws like, “Please don’t hurt me!”.

The poor thing! I bet he doesn’t like watermelon anymore…

Another week went by with no groundhog in the trap, only sightings of him running under the porch. Then one Thursday evening I had a bunch of scrap vegetables from making veggie wraps for work the next day. I decided to give that groundhog a smorgasbord of baits to choose from. The assortment included cucumber, mango and romaine lettuce. The next morning before work, David dumped the whole bowl of bait inside and set the trap and we went to work.

That evening instead of coming straight home, David and I went to town to dine at Osteria 510. We had a conversation with Vincenzo (owner/chef) about our pesky groundhog. He mentioned that lettuce works for live trapping groundhogs. After dinner, we walked to our car and noticed Vincenzo also had a groundhog outside the backdoor of the restaurant. Ironically, it looks like he may need to set his trap.

When we arrived home and topped the driveway that evening, we noticed the trap was turned in a different direction from which it was set.

Lo and behold inside the trap sat that pesky groundhog!

WE GOT HIM! I guess the lettuce had done him in!

Like the raccoon, the groundhog was scared to death. I noticed that his little groundhog paws were raw and swollen from digging at the cage all day.

We drove down the mountain and released the groundhog at a nearby park about a mile or so from our house. The park has a wide open field adjacent to it, perfect for free frolicking pesky groundhogs. I know a mile doesn’t sound like it is very far away, but the park is clear over on the other side of the mountain. It’s not likely that the groundhog has that strong of a homing sense.

On the way home I began to sing a little ditty I like to call: “Ding-Dong The groundhog’s gone!”. David and I were relieved to know we had gotten rid of that pesky groundhog. Me, because I didn’t have to fill the hole again and David because he didn’t have to hear me bitch about it anymore. Live trapping groundhogs is quite a challenge indeed.

Unfortunately, the groundhog eviction was short-lived.

Only 3 days later, we noticed the hole was back and even bigger than before! Apparently, there was more than one groundhog living under our porch or when one went missing the other one decided to move in. Regardless, we still had a groundhog situation.

We set the trap the next couple of days, but no groundhog, but on the third day we arrived home one evening to find him in the trap. In a short time, we caught Groundhog #2!

Groundhog #2 was indeed a lot larger than the one before. He was a lot feistier, pissed off and showed his teeth whenever we got near the cage. A lot less timid than Groundhog #1.

I told David that this was a groundhog couple. Perhaps the one we caught previously was his wife?!? I don’t know, but like the groundhog before, David and I drove down to the park and released the groundhog by the park. This one ran to the exact same spot as the other had.

I can only imagine them reuniting with each other in the field beside the park. For the past week, David and I have looked for the groundhog couple frolicking out in the open field by the park. We haven’t seen them, but we do know one thing… They better be counting their little groundhog blessings that they are alive and well in the field beside the park!

Good riddance groundhogs! Please, if you know what’s good for you, you better not come back!

You can now add live trapping groundhogs to the list of things in life I really didn’t know I needed to know.

2 thoughts on “Live Trapping Groundhogs On The Mountain”